The road to hell is paved with good intentions

​​Shadow is a reluctant god with a broken mind and a death wish. He used to be Thomas Astley-Byron, an affluent young screenwriter whose creativity and idealism saved a world from the brink of collapse. Together with Henry Nowak, an AI expert, Tom created heaven on earth by inventing a Jungian simulated reality that helps humans confront their dark sides. The benevolent manipulation platform turned the two unelected leaders into beloved gods, but now everything is failing. The worlds suffer as a sentimental Tom descends into his own personal hell, becoming the embodiment of everything he despises and a shadow of his former self.

His journey from an optimistic, joyful Tom to a gloomy Shadow is paved with heartache and sinister interference from emerging technology. Humans and bots fight for his heart, but their aims differ: some want to own it, some to dissect it, and others to end its foolish beat. Estranged from the love of his life—the activist poet Nathan Storm—Tom fails to realize the biggest threat comes from within. None of the sticky stories that steer his life end well.
​
Now, a young goddess—Estelle Ngoie—has been appointed to replace him, and unlike Shadow, Stella takes no prisoners, and her heart bleeds for no one.
​
Who’s pulling on Shadow’s heartstrings? Are their intentions malign or benign? It’s all a matter of perspective, and Shadow has none left.

An epic tale spanning across six days—one per book—and forty past decades of life lived across ten worlds and two universes.

Weaving hard sci-fi elements with social commentary and queer romantic suspense, Spiral Worlds explores the nature of consciousness and how it's connected to a not-so-secret ingredient—story. As software consumes the world, intelligence is nothing but the appetizer; the human heart is the main course.
​
If you’re looking for perfect heroes and clear villains, move right along. There is no black or white in this story about a contrast-making machine.
​ 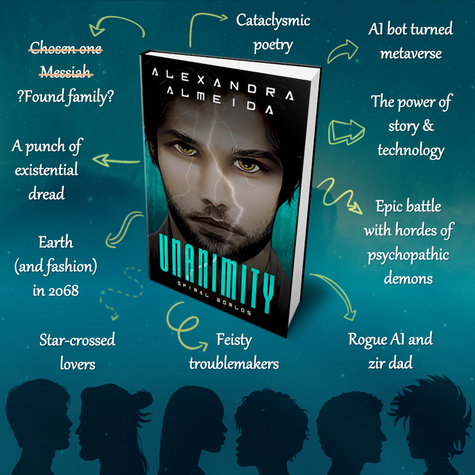 "I’m completely captivated by this first book, “Unanimity” and can’t wait for the rest of the story to unfold in the upcoming books. This series will resonate highly with sci-fi enthusiasts that enjoy intricate, well-developed stories with remarkable characters, skillful world-building, and the draw of the ever-expanding role of science in our lives." Read more here.

★★★★★
Readers Views
"This epic of vulnerable digital landscapes that draw readers in with its emotional punch and existential quandaries." Read more here.

"I adored this work by Alexandra Almeida from cover to cover for its modern take on fantasy and the subversion of so many typical themes and ideas that have become tired and overdone in the genre." "The queer storytelling elements are included beautifully and never made into a gimmick or overdone for the sake of themselves, and as such, they flow naturally with the fantasy and emotional elements of the narrative. I would not hesitate to recommend Unanimity as a sensational opening novel to a very promising series." Read more here.

"Unanimity’s technology feels well-researched and thought out.
Throughout the novel, readers get more and more of a view of both the complexity of the story world and the ideology behind the virtual reality system. Almeida does a great job of making everything about this story fully believable, as if this AI afterlife could happen in the real world in the near future."

Full review to be released on the 12th December.

★★★★★
Highly recommended by
​Chanticleer Book Reviews
"A wildly original start to a sci-fi series, this intricately woven tale is intoxicatingly original, teasing the edges of reality and fiction. With a subtle storytelling style that is both immersive and patiently coy, Almeida has crafted an ambitious existential treat for fans of near-future sci-fi." Read more here.